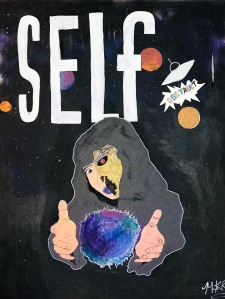 “My image captures the inner feeling of my environment. As half of the human’s face is robotically broken, the face seems to use its special abilities to uplift itself. We tend to let society take the best of us, trying to become extremely independent. Sooner than later, however, we will be obstructing our success. To break this habit, I started networking more.”

ARTIST BIO: Marquel Scott started off young when he developed the love for art. He would just pick up a pencil and create anything that struck him first. He has participated in art competitions and the odds were often in his favor. Marquel’s art mostly describes him or his personal environment, coming from Cincinnati, OH.