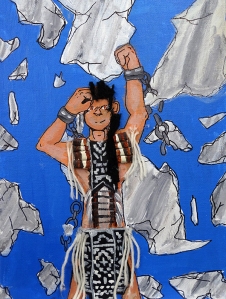 “While I was exploring the SOS Art Retrospective Artworks, I stumbled upon one which inspired my artwork, it was a piece about Native Americans, a sculpture. It reminded me of my ancestry as one of my ancestors was Native American; my family lost connection to Native American cultures and practices. I remember watching videos of Native Americans now and day practicing their culture and practices after looking at the piece also how there was a time practicing that wasn’t allowed in America. This inspired my piece based around Native Americans now.
I learned quite a bit about Native Americans and their practices and culture now while working on the art piece. I watched videos of their dances, clothes, culture, stories on finding their way back to Native American culture and pictures of their clothing even looked up news about anything happening in the Native American and Indigenous people community.
After hearing many stories about how many Native Americans found their way, started learning about the culture, and saying they practice, dance because some of their ancestors right to practice freely was taken. I decided I wanted to focus on how that and how they are breaking free from the limitations of their culture and is practicing their culture freely.
On my piece I used a couple different collaged items: yarn and painted news paper on top of painted canvas. I wanted with the yarn and newspaper to capture some of the texture of the traditional Native outfit and hair, parts I find are significant to Native culture and practices such as the braided hair which they usually have braided by a loved one or someone they trust a lot or do themselves, braided with good vibes and thoughts. I used yarn for the hair with braid and for the fur or animal skin (sometime just regular cloth too) hanging down on their clothes. In most traditional you find hanging pieces of fur, some kind of animal skin or just material, it seems like a very important and significant part of their clothes and culture so I wanted the yarn to represent it. The newspaper painted in a pattern and to represent beads or bones they incorporate in some of their clothes which depends on the tribe and practice whether those are incorporated but still have seemed very significant.
The message I was trying to convey was about how the many Natives Americans are now embracing the culture and practices of their people after so long of Natives not being able to. Some breaking but there are still many unconnected to their ancestry, culture and practices of ancestors. Some still need help connecting to it but don’t know how. The culture, practices and history locked away from them, barely any is talked about besides a little in history class and the occasional videos that may pop up on social media and they are kept in a “black and white” world and may need some help to learn from others.”