Who is Your Neighbor? 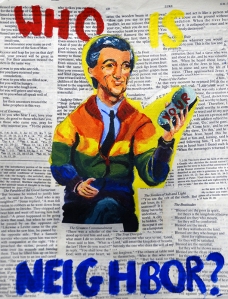 “I was intrigued by the replica of the Statue of Liberty in the Retrospective. Her sign says that America is for white, English-speaking Christians only and I wanted to create a work that would appeal to people that fit that description, which includes me. Mr. Rogers is a well known and beloved American who used his privilege as a wealthy, white, Christian to educate children about compassion. For instance, after the assassination of Martin Luther King Jr, Rogers introduced a gay black actor, Francois Clemmons, on the show. Famously, he and Clemmons shared a wading pool, which was seen as inappropriate at the time. By breaking these boundaries, he introduced the young people watching his show to diversity and depicted it as a normal and positive process.
This artwork is based on my personal experience with discrimination. Many Christians have a long way to go in treating the LGBT community like neighbors, something I have learned firsthand. For the background, I used some of the most powerful and well known sections from the New Testament, such as the Sermon on the Mount and the story of the Good Samaritan. I specifically found verses that encourage Christians to love their neighbors and to focus on improving themselves rather than judging others. People who claim that LGBT individuals are sinners who have no place in church often cite mistranslated Bible verses that are out of context, so I used the same source for legitimacy. In this work, I am trying to communicate with Christians that they should take a look at their beliefs and consider whether they have truly been treating everyone as a neighbor, just like Mr. Rogers, and more importantly, like Christ did. “