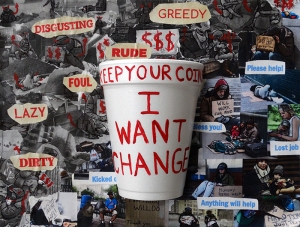 “Did you know that on a given night over 500,000 people are experiencing homelessness in the US? I learned this while researching for this project and I was surprised by how high this number was. I also learned that the top 3 causes for homelessness are lack of affordable housing, unemployment, and poverty. Most of the time, when these people fall upon hard times, they are treated like they are less than human. I was influenced by the SOS Art Retrospective artworks titled “The Grey” and “Outside Eden” by Jim Conroy. His works focused on the fact that we tended to ignore the lives of homeless people when all they really wanted was to be treated with kindness. It inspired me to do a work that showed the difference about how we perceive homeless people versus who they really are.
Since I wanted to show the difference between our society’s perception and the reality of homeless people, I decided to split the page in half and pull different types of pictures of homeless people. I spit the images into two piles randomly and then treated each pile differently. On the society’s perception side, I treated the paper to look dirty, ripped the edges, and painted the people with devil features. However, on the other pile all I did was cut them out and glued them down. I liked the contrasting look of this, because it showed how differently things can look by just the way we treated them. We tend to have the perception that homeless people are dirty, deceitful, and lazy, but if we take a step back and change our perspective, we can see that they are people just like us that fell on hard times. They deserve to be treated with kindness and respect rather than demonizing them. I wanted this work to convey that homeless people are just like us and just as possibly could be us if we feel upon hard times. We need to change our way of thinking when looking at homeless people because they deserve at least that.”