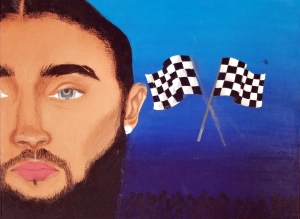 “Ermias Joseph Asghedom, known as Nipsey Hussle, was a rapper, a father, son, brother and an inspiration to not only me, but millions of others. He turned his whole life and career around from being on the streets, to bringing his earnings and knowledge back to support the very streets of Los Angeles he grew up in. Nipsey was assassinated March 2019. My piece represents the calm, the support as well as the terror. When looking deeper into the piece, one may notice the barrel of a gun in the reflection of his eye, made to symbolize how he was terribly murdered.”

WINTON WOODS HS BIO: Winton Woods City Schools partnered with the National Underground Railroad Freedom Center in its ‘Gifted and Talented Introduction to Art’ for ninth grade students to focus on projects upon the theme of “Freedom.” Under the guidance of art teacher Megan Smarda, students explored “what freedom meant to them.” They researched, investigated, thought in-depth about the question and created artistic solutions to their thoughts. The project became personal for the students and sparked great passion in them.