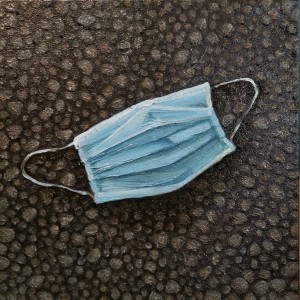 “This piece was titled, ‘Whose Side Are You On?’ when the act of wearing a mask became politicized. Simply choosing public safety became a declaration of who we were voting for. Even though I completely agree with using protection, the act of then throwing this treasured piece of PPE on the ground only hurts all of us in the long term, so really, whose side are you on?”

ARTIST BIO: Devan Horton is an oil painter from northern Kentucky whose work addresses our cultures obsession with consumption and waste. Since receiving her BFA in painting from Northern Kentucky University in 2015, Devan has shown in local and national galleries, including a series of pop-up galleries she curated titled, “Perennial”. Devan’s work encourages a change in perspective hoping that we can all see that climate change is the most important problem facing our generation.