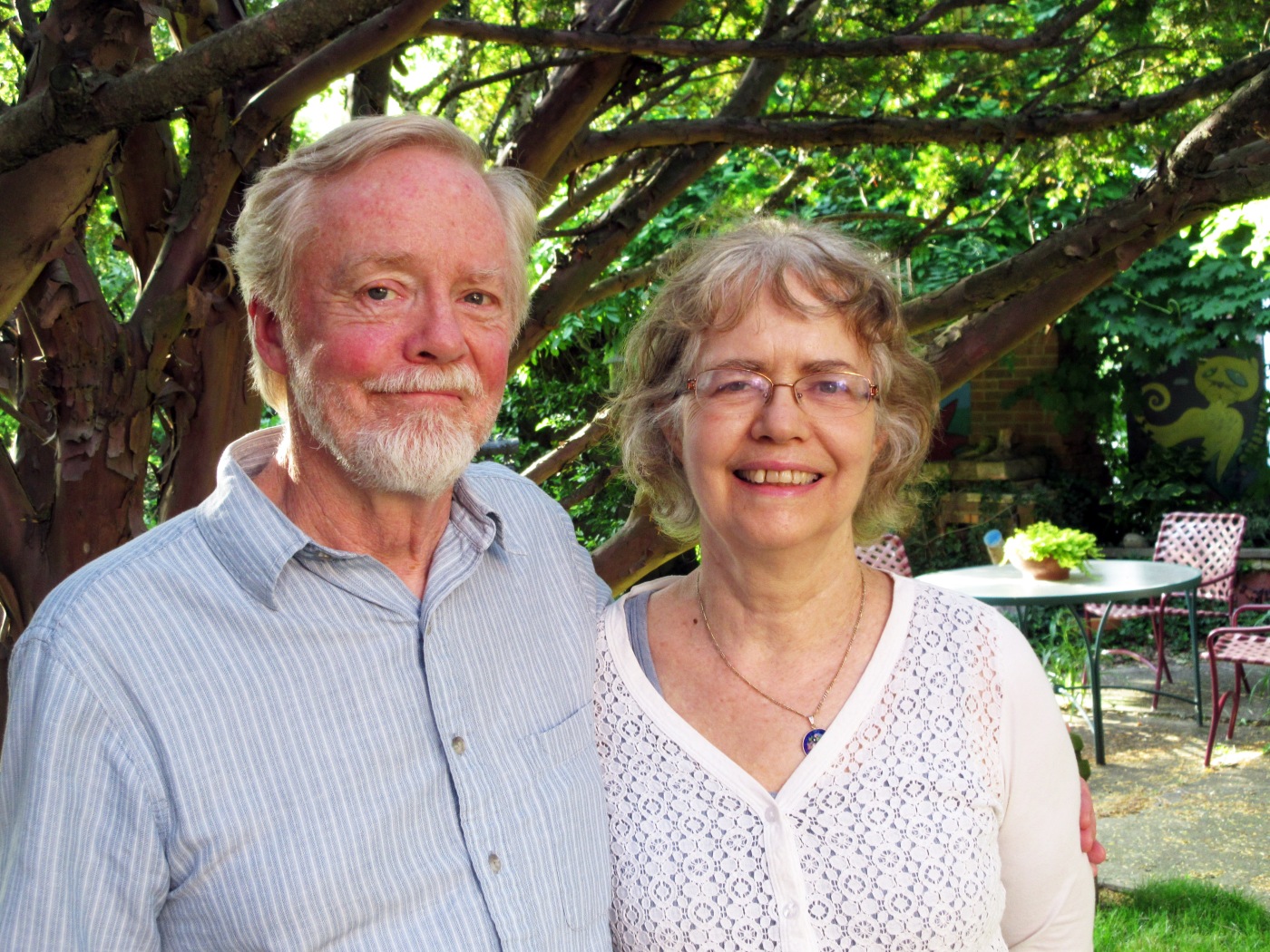 Deborah Jordan and Bill Cahalan are partners in life and in faith; they complement each other and their actions for a peaceful, natural and just world. Raised Christians, Jordan with no particular denomination, Cahalan in rigid Catholicism, both, as adults, drifted and joined The Religious Society of Friends, aka Quakers.

“What I love about Quakerism is its combination of mystical and activist traditions,” says Jordan. “Bringing them together is very powerful, the spiritual informing the activism and vice versa.” “The beliefs of the Quakers met my interest in mystical traditions such as Buddhism, Daoism, Native Americanism,” says Cahalan. “They invited a shift from the image of God as a loving but punitive distant patriarch presented to me by Catholicism, toward that of a divine Spirit living equally in nature, humans and all creation.” He adds: “I always had, since a child, a very strong spiritual connection with the natural world.”

The peace, social justice and equality teachings of the Quakers resonated also very strongly with both of them, already exposed to these values through their upbringing. Growing up, Jordan always spoke up for the underdogs; and Cahalan was inspired by the ethical and moral values of Catholicism, mainly charity, love and compassion. It is in college, however, that their activist involvement clearly materialized. Jordan, then at Ohio University, protested actively the Vietnam War going on at that time, and was jailed as a result; and Cahalan, at Xavier University, demonstrated with other students against the scheduled talk on campus of George Wallace, segregationist Governor of Alabama, and succeeded at getting his invitation cancelled.

Jordan’s journey took her since on many paths. She dropped out of college and became the coordinator for the Nuclear Freeze local chapter in Cincinnati; participated in antinuclear protests at the Nevada Test Site and was arrested; wanting to counter violence, got a master’s degree in education and took a job at the Center for Peace Education (CPE) providing peace education, conflict resolution and mediation services to Cincinnati public and private schools; provided mediation to the juvenile courts; and, interested in healing, had become an R.N. and practiced as such for many years.

Cahalan graduated with a master’s and PhD degrees in psychology and worked as a clinical psychologist. After being inspired by the anti Vietnam war movement, the Counterculture Revolution, Black Power and Women’s movements, he became actively involved in ecological activism in the 80’s, protesting the damage that our economy and current culture were causing the natural world. In 2011 he went to Washington DC to participate in the march and direct actions against the Keystone XL Pipeline which would increase reliance on fossil fuels and negatively effect climate change. He also protested the Dakota Access Pipeline, a threat to the Standing Rock Indian Reservation’s clean water and ancient burial grounds. On December 8, 2014 rallying a protest movement launched by EQAT (Earth Quaker Action Team), he and Jordan joined 27 other groups in 8 different states for a sit-in at PNC bank branches demanding an end to the Bank’s financing of mountaintop removal coal mining in Appalachia. As a result of this, culminating five years of action, PNC Bank announced March 2015 its divestment from such projects.

Both Jordan and Cahalan became very involved in the local food movement. Thery are part of a neighborghood community supported agricultural group, or CSA, in their neighborhood of East Price Hill where they contribute to organic gardening, building a healthy soil, protecting the environment, and sharing food and camaraderie with other participants. They are also members of ‘Imago’, a grassroots, environmental education organization located as well in Price Hill and which aims to promote living in concert with the natural world, reconnecting people and planet, building a human community that sees the Earth as sacred. “One of the slogans of ‘Quaker Earthcare Witness’, a national network of Friends who seek to address the ecological and social crises of the world from a spiritual perspective, is ‘Peace on earth, Peace with earth’,” says Cahalan. “If we do not protect the earth we will continue destroying the matrix of life, and, as a result, will continue eroding peace among people.”

Ten years ago, Jordan started the publication of CORV (Central Ohio River Valley) Local Food Guide, a grassroots yearly magazine with the mission to connect community members with local growers and fresh, healthy local food. “We aim to promote self-sufficiency, sustainability and the wise use of resources in the building of our local food system,” she states. “We want also to educate our readers on the importance of eating local.”

Another area that connects strongly Jordan and Cahalan in both their interest and activism is the field of mental health. As a clinical psychologist Cahalan chose from the start to help individuals suffering from serious breakdowns in their personality and life. He sees, however, mental problems as disordered ways of relating with others and with self, and not as brain diseases, and deviates in this respect from mainstream mental health which relies heavily on hospitalization and medication, often against the patient’s own will, for alleviation of the most disordered states, such as those labelled psychotic.

“Forced hospitalization, medication and community probate are violations of human rights,” he says. “Worse, they have often proven ineffective, keeping the individual dependent on medication for life. More humane psychosocial alternatives are needed.”

In fact, alternatives, such as ‘Open Dialogue’, for instance, have been used successfully and for decades in Finland. They provide psychotherapy and social network support to the individual at home or in open households, and have resulted in more than 80% recovery on 5 year follow up.

“Unfortunately, the mental health field, strongly influenced by the pharmaceutical industry, resists a more relational, empowering and human approach that does not focus on disorders as illnesses and is not imedication-centered.”

“It felt like a calling, a leading,” Jordan says. “There was a need to bring awareness to people suffering from mental health distress, that holistic, bio-psycho-social approaches to treatment, with no stigma and expected full recovery, were available to them.”

The ‘Network’, a grassroots effort, provides education, support, advocacy and outreach, all focused on propelling to the forefront the whole person, whole community, alternative approaches to mental health care. It achieves this through open meetings, expert speakers, public events.

Jordan and Cahalan find strength and inspiration for their work and activism in the Quakers’ testimonies and practices of peace, justice, equality, integrity, earthcare and community.

“In Quakerism, there is no pastor,” says Jordan. “We’re all considered ministers and get to do all the work. When meeting ends, service begins; our service to the world, that is…”

As to how they view their service to the world in the years to come, Cahalan sees it in helping build a local resilient community and a sustainable, grounded life, connecting to local neighbors and friends, living in harmony with the earth; also in more political activism, taking a stand on issues of social justice importance, getting out to the streets, marching, protesting, sitting-in, getting arrested… For Jordan, building resilence within herself and others is of paramount importance. She will continue her current involvements. Faithful, however, to the Quakers’ process, she will keep a space inside for silence and deep listening; will keep doing what she knows and is able to do; and leave the end result to the Spirit.